Innis & Gunn beers will be served at over 20 bars throughout the Royal Highland Show, which takes place from 23rd-26th June and is expected to welcome in the region of 200,000 visitors.

Both the Royal Highland Show and Innis & Gunn are aligned in their motivation to champion Scottish producers, supporting the industry and the country’s wider economy.

The new partnership will allow the ethos of the Royal Highland Show to extend to the Showground bars, with Scottish beers available to be enjoyed for the first time.

Iain Green of Corskie Farm in Moray, is a RHASS member and exhibitor of cattle and sheep at the show. His farm supplies barley to the Crisp malting group who in turn supply it malted to Innis & Gunn. Iain is looking forward to sampling the award-winning Innis & Gunn beer, made from his own barley, when he visits the show this year!.

Iain said:  It is great to see Scottish produce come to the fore at the Highland.  As a showcase for the best in food, forming and rural life, it is field to pint at its best!”

Headquartered in Edinburgh and with their own brewery in Perth, Innis & Gunn have grown to become one of the biggest independent brewers in the UK, exporting to over 20 countries around the globe.

Innis & Gunn work with various Scottish suppliers to create their multi-award-winning beers, with malts sourced in Scotland, barley malted in Alloa and spent grains collected by local farmers for use as cattle feed. 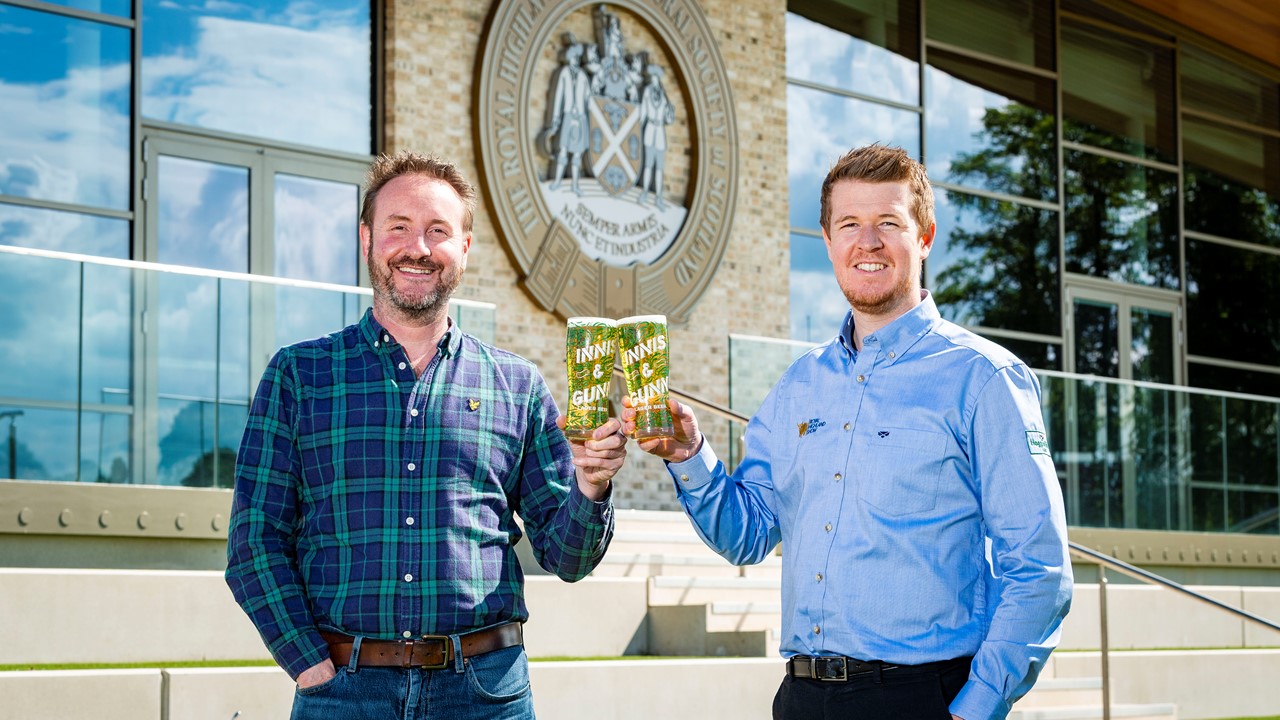 “We are delighted to partner with Innis & Gunn this year in celebration of an exceptional Scottish brand.

“Their focus on Scottish provenance and commitment to local suppliers aligns well with the ethos of the Royal Highland Show, which is all about telling the story of the farm-to-fork journey and engaging visitors with this process.”

Dougal Gunn Sharp, Innis & Gunn Founder and Master Brewer said: “The new partnership between Innis & Gunn and the Royal Highland Show is an excellent match. The event showcases and celebrates the best that the country has to offer and our multi-award-winning beers, brewed in Scotland, using Scottish ingredients perfectly align.

“I am thrilled that for the first time, attendees at the Royal Highland Show will be able to enjoy Scottish beers, from a quality producer who actively champions and supports their industry. Every pint of Innis & Gunn beer consumed at the Show will ultimately support the sector in return, which gives all the more reason to enjoy.”

Tickets, including for car parking, must be pre-purchased online this year and no tickets will be available to buy on the gate. Tickets are limited in number this year with sell out days anticipated, so it is advised to purchase early. For further information and to purchase tickets please visit www.royalhighlandshow.org.